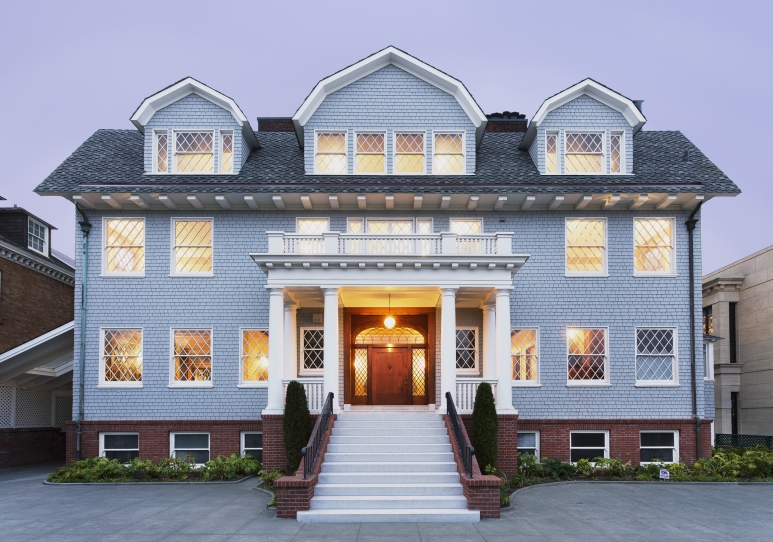 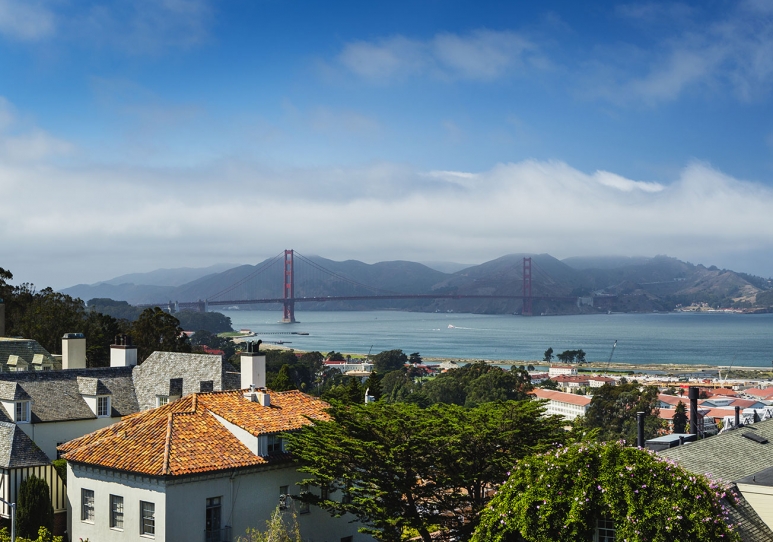 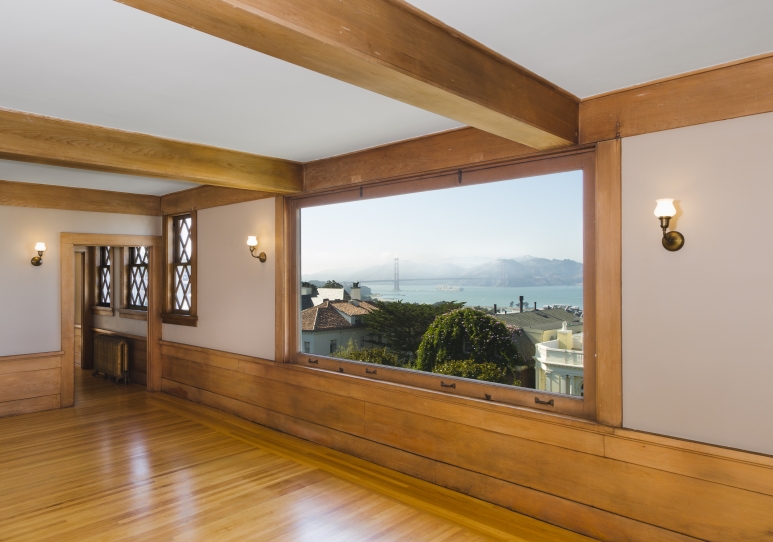 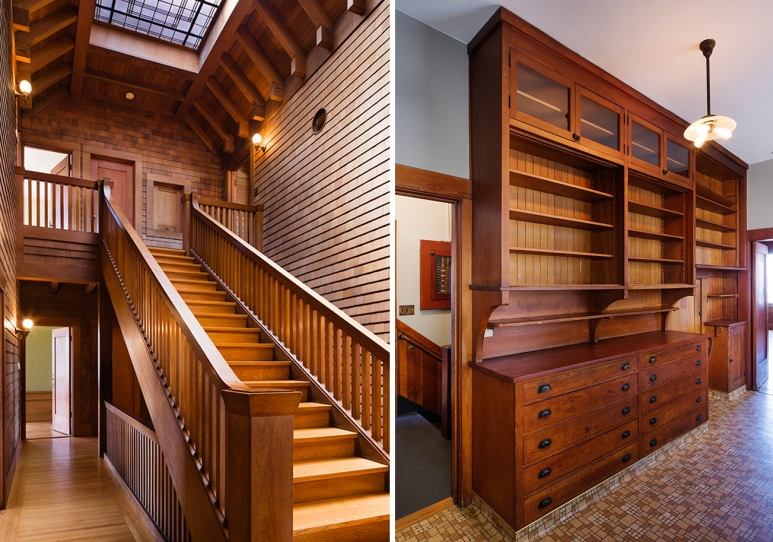 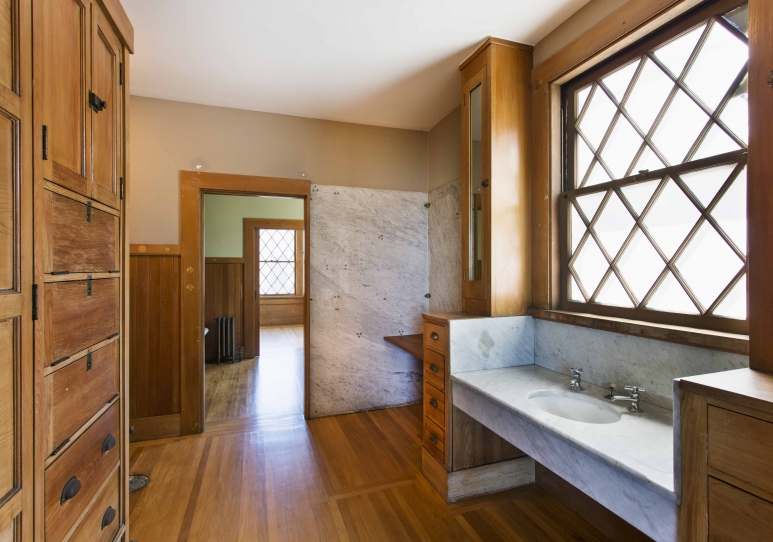 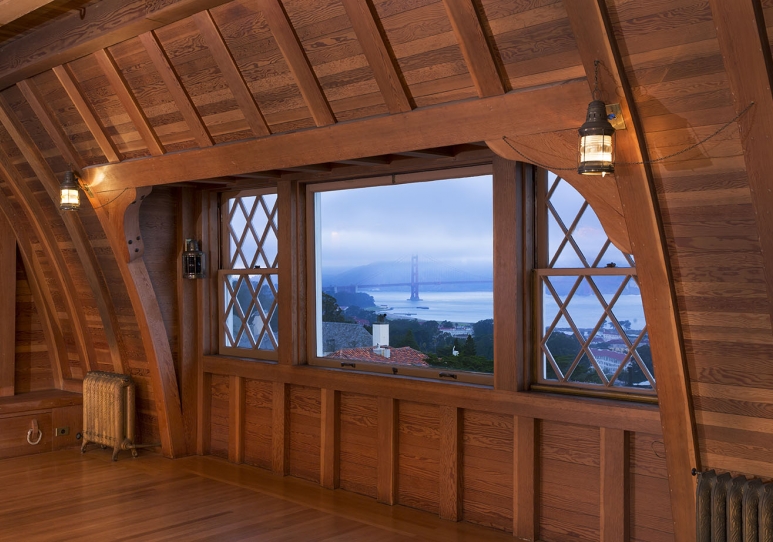 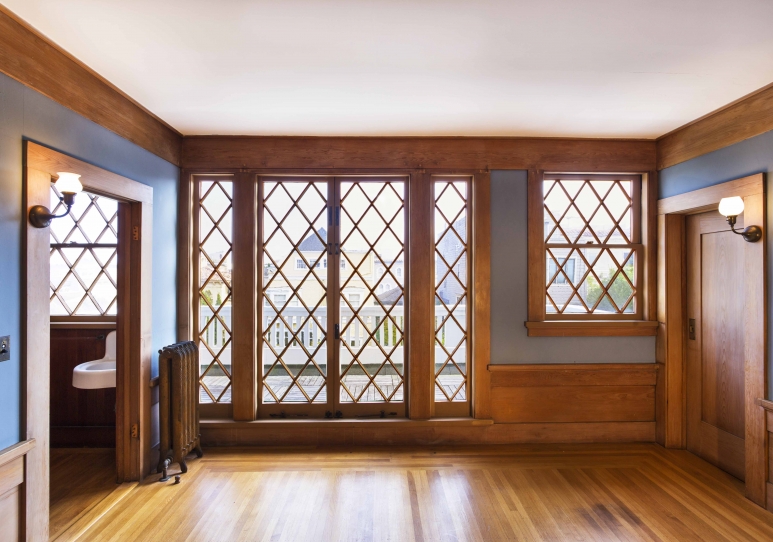 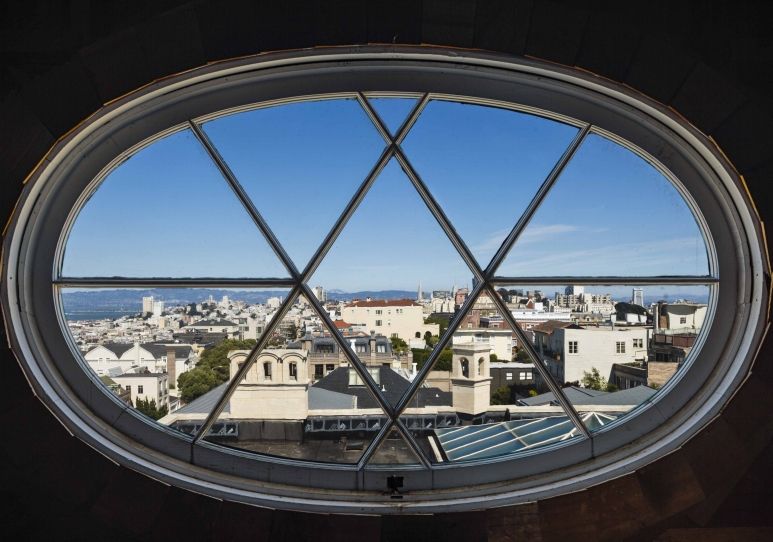 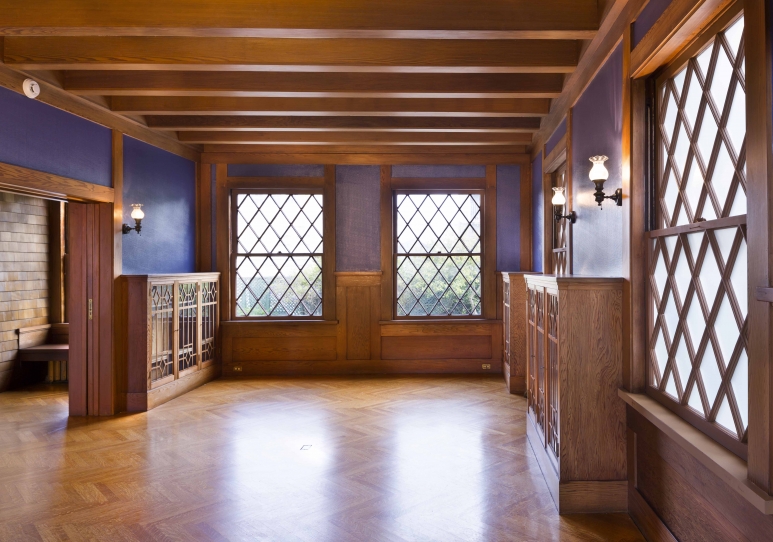 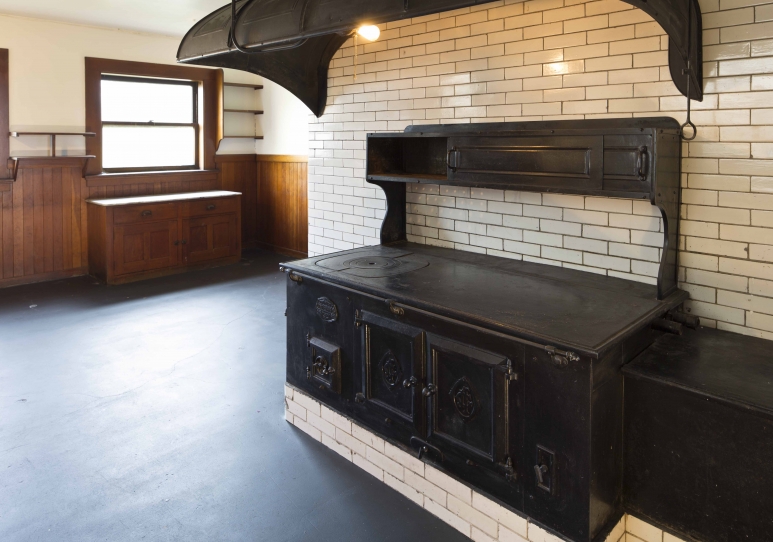 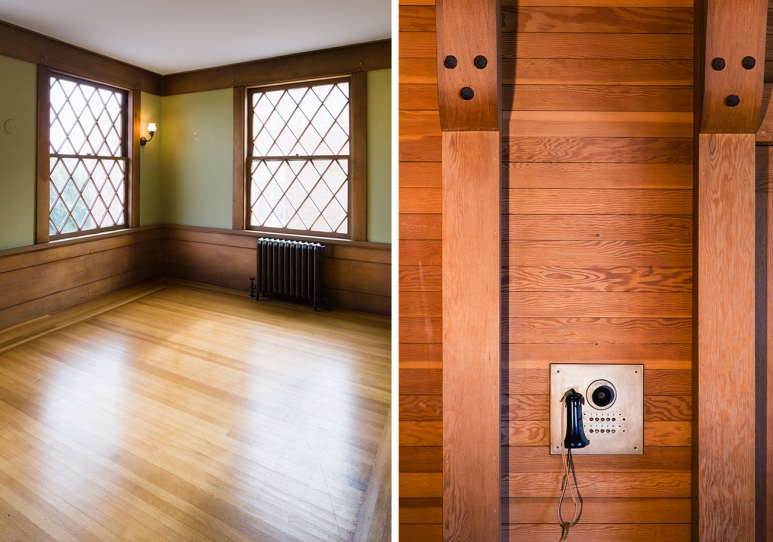 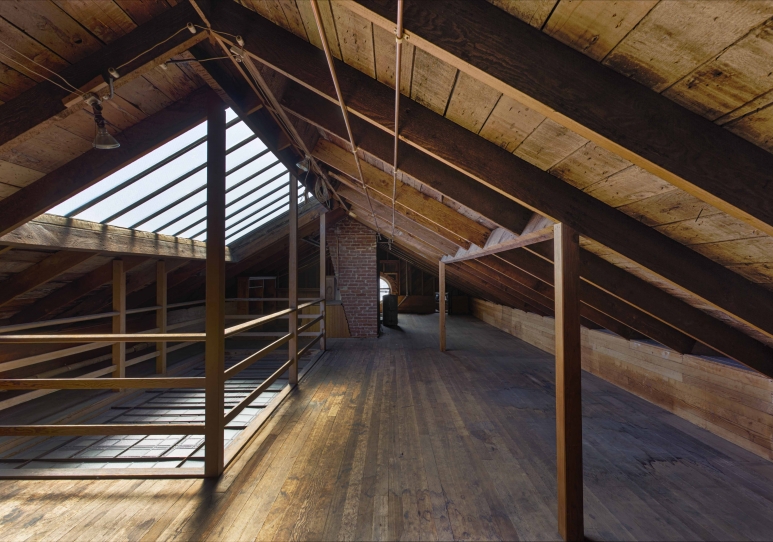 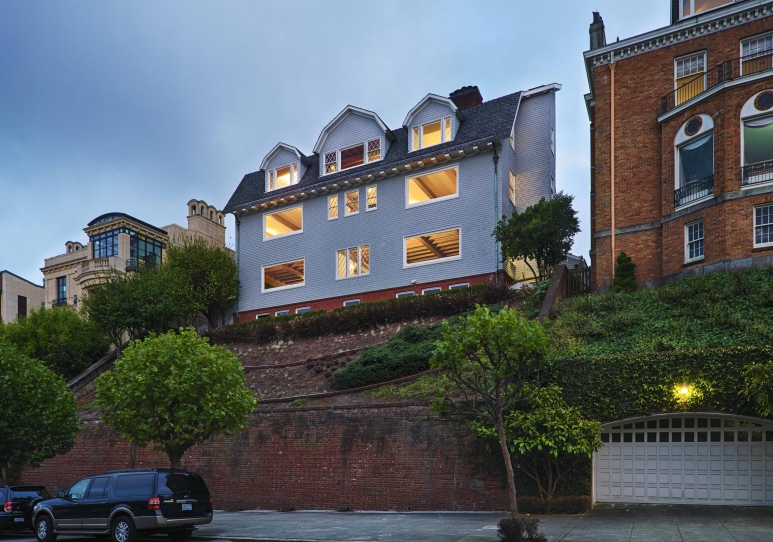 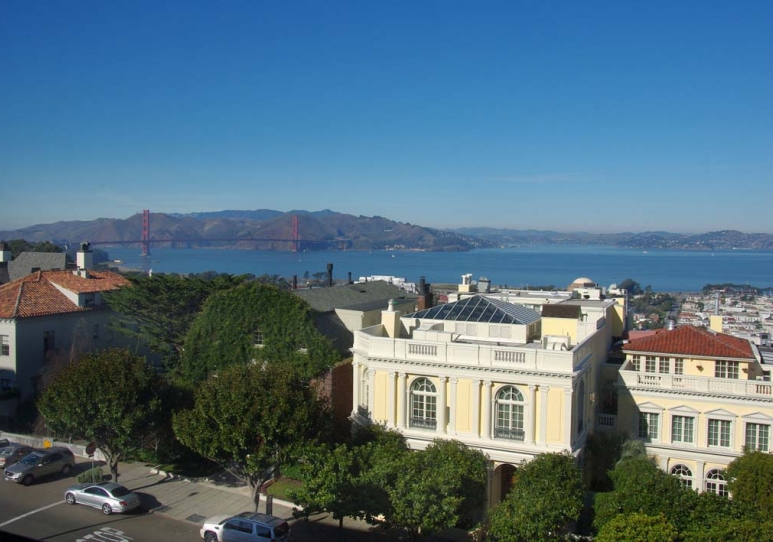 The beautifully proportioned LIVING ROOM and DINING ROOM feature oversized picture windows and smaller diamond paned windows encompassing the memorable views of the Bridge and the bay from morning to dusk. The LIBRARY looks out to the courtyard. Handsome beamed ceilings, rich wood paneling, herring bone floors and fireplaces provide a welcoming ambience in these lovely rooms.

The SERVICE KITCHEN off the dining room connects to the MAIN KITCHEN located in the lower level as was the custom at the turn of the century. The latter can be reconfigured for today’s style of cooking and informal socializing.

Natural light from the impressive art glass skylight infuses the grand staircase and landings of the two upper levels with light. The voluminous space with its expansive tall walls are ideal for the display of a private art collection.

The luxurious MASTER SUITE encompasses the north half of the second level. The MASTER BEDROOM and SITTING ROOM enjoy the expansive views.

The view of the handsome staircase assembly with stunning skylight overhead and volume of the gallery space from this high vantage point is most impressive.

The warm and spacious nautically inspired “CAPTAIN’S ROOM” with panoramic bay views reflects the original owner’s yachting background, a casual yet elegant gathering place of choice for family and friends. It makes for an ideal media room in this day and age. A BEDROOM with SITTING ROOM also enjoy the bay view. Two smaller BEDROOMS, 2.5 BATHS and 3 staff rooms complete this level.

The oversized KITCHEN and pantry, along with a myriad number of rooms–for wine storage, laundry, exercise, potting, mechanical/utilities–service house and household needs. This enormous space with high ceilings and windows looking out to the bay and courtyard can be reconfigured as the new owner may desire.

Albert L. Farr was born in Omaha, NE, and grew up in Yokohoma, Japan, where his father was a USG official. The family settled in San Francisco on their return in 1891. He was interested in furniture design, trained as an apprentice for a British architect and in 1901 was one of the first licensed architects in California. He was influenced by English arts and crafts, then by the First Bay Tradition led by Bernard Maybeck.

2950 PACIFIC Avenue was one of his early major designs commissioned by Mrs. Virginia Whiting Newhall, wife of Edwin W. Newhall, a wealthy entrepreneur. She had experienced the Great Earthquake of 1906 and was certain that a properly built New England style (wooden) would better withstand future earthquakes. Farr was not shy about incorporating brown shingles into the Dutch Colonial Revival style that his client favored. He incorporated impressive solid beams into his ceilings, exquisite wood craftsmanship in all of his interior architectural details and diamond panes in his window works. The solidly impressive “CAPTAIN’S ROOM” in the top floor of 2950 Pacific was homage to Mr. Newhall’s love of the sea and sailing.

Farr’s works eventually evolved towards the popular European revival styles–Medieval, Renaissance, Mediterranean, French, Spanish Colonial and American Colonial. His consistent signature input in his commissions throughout the Bay Area were characterized by a fine sense of proportion, balance and fine details. Among his enduring early commissions in the City were: 2714 Broadway (1900), 2660 Scott (1901) and 2310 Broadway (1903). Two notable commissions in later years were: 2570 Jackson (1923)–the French consular residence until 2013, 3450 Washington (1929)–the Guggenheim residence, and 3699 Washington (1929).

In his later years he took on a partner, naming his firm Farr & Ward. He resided in Piedmont where he passed away in 1947.